Aliaga : 80m high, outside diameter : 7,1m supported at 46m from the ground by a steel framed structure

Design loads and the methodology of analysis were defined according to the ASCE 7-05 code. Given the fundamental frequencies of the chimney, this structure is assumed as rigid for the purpose of wind assessment and therefore a static analysis was conducted based on the application of equivalent static loads. Table 4 systematises structural data, namely dimensions, mass and damping ratio (defined according to the ASME STS-1-2011 specification), force coefficients and importance factor. It is stressed that, in accordance with the Technical Specifications, an allowance of 10% of the calculated frequency has been considered. Therefore, the natural frequency listed in Table 4 has been fixed as 90% of the lowest possible frequency, the later corresponding to the heated and corroded situation (0.9×1.45=1.31Hz).

The results of a complementary verification of the sensitivity of the chimney to vortex shedding are summarised in Table 8, following the methodology proposed in the ASME STS-1-2011 specification. Considering the allowance of 10% for the lowest calculated frequency, it is verified that the chimney is prone to vortex shedding, according to the ASME-STS-1-2011 code, as the critical vortex shedding wind velocity of 46.36 m/s does not exceed by more than 20% the design wind velocity at 5/6 the chimney height (44.27 m/s). Having this aspect into consideration, static equivalent forces were calculated according to defined in the ASME-STS-1-2011 code, in order to check the amplitudes of vibration and stresses.

The very high calculated amplitudes of vibration and stresses motivated the option to implement a tuned mass damper (TMD) tuned to the direction Y (most flexible direction). For the other horizontal direction this TMD is not required as the vortex shedding critical velocity (58.8 m/s) exceeds by more than 20% the design wind velocity (1.2×44.27=53.1 m/s).

Finally, it is noticed that the Scruton number Sc, defined as

where ξ is the structural damping ratio and m0 is the distributed mass of the stack, has a value of 5 without TMD and reaches 35 with TMD. The analysis of Figure 7, extracted from CICIND, shows that while for a Scruton number of 5 significant vortex-shedding vibration amplitudes may occur, these amplitudes cancel for Scruton number values higher than 25, even for the lower Reynolds number (in the present case, this number should be of the order of 2×107), meaning therefore that vortex-shedding can be avoided with the implementation of a TMD able to provide an added damping of 6%.

According to the UBC 1997 code, the static force procedure cannot be applied to this chimney, considering the corresponding height. Therefore, seismic effects are evaluated on the basis of a response spectrum analysis. However, for the purpose of comparison, the loads determined according to the static force procedure have been calculated and are summarised in Table 13 considering the first two modes in each direction.

For the dynamic analysis of the structure based on a response spectrum approach, a damping of 5% was considered, according to specified in ASME-STS-1-2011. The design response spectrum was calculated based on the one proposed in UBC 1997 for such damping, as represented in Figure 8. 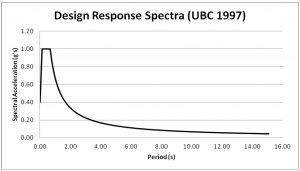 Figure 8. Design response spectrum according to UBC 1997 and parameters from Table 10.

The seismic response was then calculated for the un-corroded chimney at normal temperature and the heated corroded chimney. Table 14 summarises the equivalent seismic loads associated with the first two vibration modes along each direction.

A comparison between the base shear and bending moments calculated on the basis of the static procedure and of the response spectrum analysis is presented in Table 15, considering a response factor R of 2.9. These forces and moments were in both cases calculated by combination of the forces in correspondence with the two mode contributions along each direction using the square root of the sum of squares (SRSS). As expected, the response spectrum method leads to a lower response than the static procedure. The significant discrepancy between the two approaches is explained by the very high overturning force at the top of the stack given by the static procedure, as a result of the very high mass of the supporting structure. This seems unrealistic.

Finally, the response spectrum analysis results based on the first 7 modes and on an SRSS combination are presented in Table 16, and colour maps of the stresses are shown in Figures 9 and 10 for the two chimney conditions, NTNC and TC, considering independently combinations of the seismic forces along X and Y directions with forces along direction Z. Detailed colour maps of stresses in the lower part of the stack for the heated and corroded condition are further represented in Figure 11 to illustrate the small amplitudes observed in that part of the chimney. 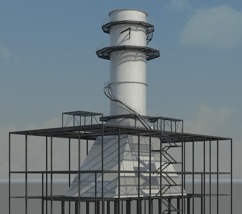 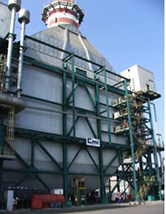 Numerical models of both the original and the reinforced structure were developed. The goal was to obtain the structure’s natural frequencies and to compare behaviors in order to determine the effectiveness of the applied reinforcement. Several simplifications were made to the structure’s geometry, according to customer’s recommendations. These simplifications allowed for easier result handling and maintained intact the principal horizontal actions resistant structural schemes.