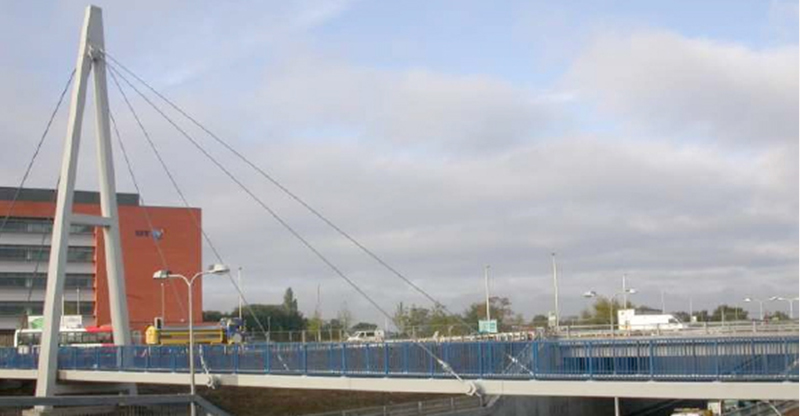 Identification of the modal properties of the A41 All Saints Way Footbridge, with the purpose of specifying the characteristics of dampers to install.

Located in West Bromwich, the cable-stayed footbridge has a total length of 51.15 m and is formed by a steel deck suspended from an A-shaped tower by 3 pairs of stay cables (Fig. 1). A main span of 38.55 m is formed, which will be damped by a pair of passive devices located some 3 m away from the edge support (Fig. 1, 2). The back span has a length of 12.6 m.

METHODOLOGY FOR SPECIFICATION OF DAMPER CHARACTERISTICS

In order to assess the equivalent damping provided by a set of dampers installed in a footbridge, some knowledge is required on the corresponding dynamic properties, namely those referred to the exact natural frequencies and modal configurations.

Therefore, as a basis for the specification of properties of the dampers, an ambient vibration test was conducted, aiming at identifying the most relevant natural frequencies and modal configurations.

Considering that temporary dampers would be installed, it was decided to conduct complementary tests in order to assess the efficiency of those dampers, therefore providing an added knowledge into the expected performance of the final devices. In these conditions, a series of pedestrian tests were conducted prior to and after installation of temporary dampers.

These tests were of two types, one corresponding to the crossing of pedestrians, trying to achieve resonance in a fundamental vibration mode, the second corresponding to the induction of a resonance response by jump, followed by a sudden interruption, in order to measure the free decay response and identify the damping ratio. It was therefore possible to characterise the actual performance of the footbridge in terms of provided comfort level, and also to characterise the level of damping present in the structure prior to and after installation of temporary devices.

The test was based on 2 seismographs programmed by a laptop and synchronised by means of GPS antenna. Each of these seismographs has a triaxial accelerometer incorporated, therefore at each measurement section, vertical, longitudinal and lateral
accelerations were measured. 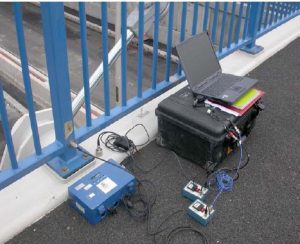 The test consisted in measuring permanently the ambient response at one particular location, while the other seismograph was successively positioned along the other points. For each position, the seismographs acquired simultaneously 13-minute records of
acceleration along the three directions (vertical, longitudinal and transversal to the bridge axis). The subsequent 2 minutes were used to move the roving seismograph to another section, according to a pre-determined setup layout. The total duration of the test, including programming and synchronisation of the sensors, was of about 3 hours. During this period, traffic or construction works on the footbridge were avoided, in order to guarantee the random excitation of the footbridge (due to wind and ground motion).

The series of time records of acceleration sampled at 100 Hz were processed in order to
identify natural frequencies, vibration modes and damping ratios. The identification of those parameters was based on the ARTEMIS software [1], using the Enhanced Frequency Domain Decomposition (EFDD) and the Stochastic Subspace Identification (SSI) methods.

The analysis of the figures evidenced the presence of a very significant number of peaks. These were related with two types of vibration modes. The “widest” peaks generally refer to global vibration modes, involving motion of the deck, while very sharp peaks are associated essentially with local cable vibration modes and, for the highest frequencies, with vibration modes involving bending of the tower.

To complement the ambient vibration test, pedestrian tests were conducted both for a rigourous identification of damping of the fundamental mode and for the characterisation of the vibration levels associated with pedestrian activity. In these tests a Fourier analyzer and two accelerometers were used (Figure 14), in order to provide online identification of the fundamental natural frequency and check the quality of collected data. Using this system, it was possible to verify the fundamental frequency of the footbridge was 2.9 Hz. This frequency was then programmed in a metronome, in order to help pedestrians achieve a resonant excitation while crossing the footbridge.

The value of 2.9 Hz of the fundamental frequency of the footbridge was used to define the most critical scenarios in terms of induced vibrations. These are namely:

The analysis of Figure 16 clearly shows that the present condition of the footbridge is unacceptable, given the intolerable levels of vibration caused by 2 pedestrians jogging.

Moreover, it is observed that, in order to attain acceptable comfort values during jogging, the amplitude of the response should be reduced by a factor of 5 to 6, that is damping should be multiplied by 5 or 6 times. In reality, if the damping slightly increases, then it will become more difficult for pedestrians to maintain a resonant behaviour and therefore the amplification of the response won’t be so significant. Under these circumstances, and considering the measured damping ratio was of the order of 0.45% (this will be discussed in the following section), a target damping to achieve in the controlled structure should be of the order of 2.5%, meaning an added damping of about 2%, instead of 1% proposed initially by the Client.

In order to obtain an estimate of the damping ratio associated with the first natural frequency of 2.9 Hz, the free decay response at location R-4 (Figure 5) was measured, after resonant excitation at that location by one or more pedestrians jumping and suddenly interrupting their motion. Figure 17 shows two examples of the filtered time series of vertical acceleration collected at location R-4. The fitting of the envelopes of the free decay response by one exponential function provided an estimate of the damping ratio which was in average 0.45%.

This value is consistent with the damping ratio estimate reached using the EFDD identification algorithm. 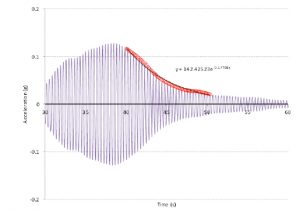 Free decay response after resonant excitation by one person 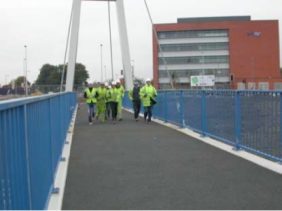 Test performed with various number of pedestrians and frequencies