Design review and implementation of cost-effective modifications to an existing SCR reactor structure, in order to reduce stress and deformation to acceptable levels during the transient thermal phases 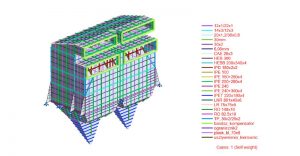 The initial study consisted of a design check of the basis and some critical area of the Selective Catalyst Reduction (SCR) reactor duct considering the existing applicable operating design and site wind actions.

The result of the design review showed that :

The structural behavior of the SCR as built when subjected to the applicable temperature gradients was deemed not safe.

Many connections and specially corners of the duct required deeper investigations in transition period at operating and shut down phases.

A deeper analysis was then performed.

67 ultimate limit state (ULS) and 6 service limit state (SLS) combinations were created according to EN 1990 / EN 1991, taking into account the self weight, the insulation, the catalyst module, the ash load, the wind, the snow, the temperatures and the design pressure.

Several three dimensional FEM models were developed for the reactor’s sensitivity analysis, using software package Robot™ Structural Analysis Professional 2014, by Autodesk®. Each model represented an attempt to simulate, in a realistic way, the stiffness of the reactor elements and its influence on the stress distribution of the structure.

The structure was verified according to the applicable structural Eurocodes. Static calculations were performed. Results showed that the temperature load cases alone made the stress values go over the applicable limits for steel 16Mo3.

The next phase of the work was then to suggest the most cost-effective design changes and simulate those design changes in the numerical model in order to evaluate their effectiveness.

To apply intern insulation was one of the possible solutions but such option was rejected due to the lack of space and loss of performance of the reactor.

The major improvements were then brought on the outside of the reactor. Main modifications consisted of new supports of buckstays, reduction of some cross sections of stiffeners and review of thermal insulation of the external supports.

The new numerical models concluded that the structural safety of the SCR would remain assured once the reparation works would be done.

MODALYSE created a complete dossier which included the calculation notes regarding the analysis of the beams and casing as stated above and also general principle drawings showing the repairing solution to be implemented.

The shop drawings, the erection procedure and inspection controls were the final steps of the project.