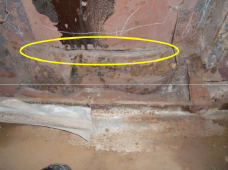 Cracks in the expansion joint flanges

MODALYSE conducted a finite element method (FEM) based on stress and deformation analysis in order to understand the current structure’s behavior and identify the factors responsible for the excessive deformation and observed cracking.

On a second phase, the developed FEM structural models were adapted to take into account the design concept modifications developed by Modalyse. New stress and deformation levels were obtained and analyzed. Conclusions were then drawn about the proposed solution effectiveness in eliminating the existing problem.

The structure was verified according to the applicable structural Eurocodes :

Several numerical models were used during the different phases of this work. The first very simplified models (preliminary analysis) were developed with software package Robot™ Structural Analysis Professional 2013, produced by Autodesk®. This allowed to have a quick idea of the forces acting on the steel casing.

The more complex models were developed with software Abaqus 6.10, a FEA and multi-physics application produced by SIMULIA, which allowed for the accurate definition of variable temperature load cases and consideration of an elasto-plastic material law for the duct’s steel casing stress and deformation calculations.

The geometry of the FEM models was developed according to the “as built” drawings of the inlet duct, supplied by customer. Figures 1 and 2 show the FE meshes used in the 2 referred softwares. Four nodes shell elements were applied. 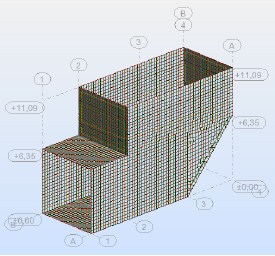 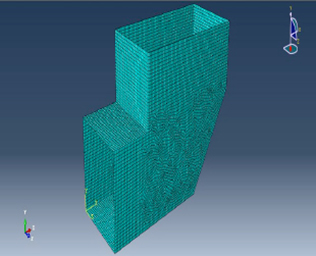 The structural models considered steel casing temperature to be the only acting load. 3 different load cases were defined:

The values of the temperatures assigned to each referred zone were different for the “as built” model and the “proposed” model, due to the proposed changes for the insulation layout.

General Considerations on the calculation models

Before beginning the development of the numerical models, a series of decisions were made about the most adequate approach to the problem, the main goals were to explain which factors contributed to the excessive deformation and cracking of the steel casing and to prove that the now proposed solution works.

Some modeling options were made, as well as some acceptable simplifications.

The referred load cases were considered as static, meaning that each zone of the duct was assigned a constant temperature value. No time-history analysis was undertaken, as it was agreed that final stress and deformations were the most important results to obtain, rather than to know the whole stress and deformation evolution process, as temperatures rise or drop.

Due to the very small thickness (6mm) of the steel casing and high thermal conductibility, temperature was considered to be uniform. No differential variation was considered between the inside and the outside surface of the casing.

Finally, support conditions were simulated with nodal supports. The differences between the “as built” and “proposed” models were simulated by the fixing / releasing of the necessary degrees of freedom.

The “as built” model considered the existing conditions of the inlet duct in terms of:

The steel casing was connected to several support beams. Although the project details seemed to indicate that the connections between plate and beams were designed to behave as sliding supports, there was suspicion that this connection behaved in fact as rigid. Because the IPE beams didn’t experience temperature variation (cold beams), once the boiler started to operate the casing was not allowed to expand freely, causing high stress local induction due to deformation compatibility. The considered nodal supports blocked displacements in order to simulate this clamping effect.

The temperatures considered for each zone and load case took into account the temperature of the circulating fluid, as well as the existing insulation and heat exchangers effects.

Some transitions appeared to be quite abrupt, creating high temperature gradients. Associated with the clamping effects, they were non-recommended details for a structure with temperature variations of very high magnitude.

Results with stress (von Mises) and deformation FE maps showed that plastic resistance limit was breached for every load case, with the startup phase being the most severe situation.

Results were coherent with the problems observed on site.

The following modifications were then considered to sort out the problems of cracking and deformations :

By implementing the proposed design modifications, results with Stress (von Mises) and deformation FE maps showed that plastic resistance limit was no longer reached, although stress peaks were clearly located in the areas where temperature variation was the most abrupt.