Identification of major vibrations of a tall chimney

Identification of major vibrations of a tall chimney 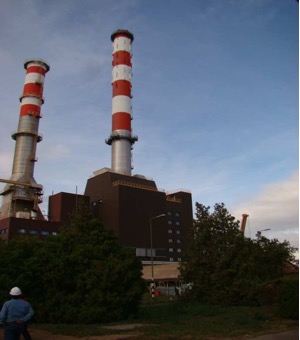 The chimney located in Dunamenti, Hungary, was 102 m high and had a diameter of 5,6 m. It was mounted on a steel framed structure at a height of 35 m and had a 5-ton TMD mounted at the top. Measurements were conducted at the first level platform, at a height of 52 m.

Seismograph measurements were conducted supporting the sensor on the platform directly over one cantilever support. Using the laptop, three time records were programmed, sampled at 100 Hz and with duration of 960 s each. Figure shows one example of the collected signals corresponding to the three measurement directions.

It was observed that slightly higher amplitudes occured along the direction identified as “RIGHT” than along direction (REAR). For the record shown here-above, peak values of 0,0034 g and 0,0026 g were achieved in each case. Vertical vibrations had lower amplitudes, reaching a peak value of 0,0022 g in the same record.

A frequency analysis of the three 960 s –long records was then conducted, by merging the files and extracting smaller records with a duration of 163s overlapped by 50%. Upon application of a Hanning time window, power spectrum density functions of the 30 records were calculated and averaged. This operation provides an accurate description of the recorded data in the frequency domain, reducing the noise in the estimates. Furthermore, the 163 s duration of the individual records allowed to ensure a frequency resolution of 0,006 Hz, therefore guaranteeing that the error in the final frequency estimate did not exceed 0,012 Hz. Figure 2 presents the average power spectrum estimates obtained for the three directions of measurement identified : REAR (black); RIGHT (red) and Vertical (Blue). 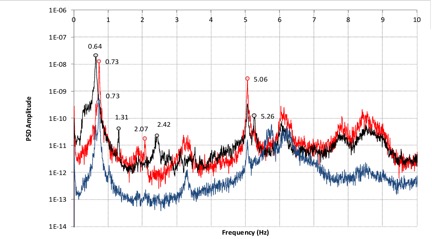 The abscissa of the peaks marked in those power spectra corresponded to the vibration frequencies, of which the first were very clearly defined: 0,64 Hz along the REAR direction, and 0,73 Hz along the RIGHT direction. A third frequency of 5,06 HZ was dominant in the response along the two directions.

The measurements using the two piezoelectric accelerometers were based on the attachment of the two sensors to steel elements rigidly connected to the stack and almost perpendicular, using a magnetic base. The measurement setup is shown in Figure 3, right, comprehending a signal conditioning unit for each accelerometer, for amplification of the signal and a data acquisition system, formed by a data acquisition card inserted in the laptop.

Data recording and analysis was conducted automatically by the Fourier Analyzer on the basis of a procedure similar to the one described for the seismograph records. Considering the characteristics of these sensors and of the acquisition system, different measurement parameters were however adopted: a sampling frequency of 50 Hz, a frequency analysis in the range 0,5 to 19,53 Hz and a frequency resolution of 0,0061 Hz. Furthermore power spectra were averaged over a series of 10 records.

The superposition of the two average power spectra along the two directions is represented in Figure 4, using the same frequency scale as adopted for the seismograph records (Figure 1) for comparison. Even though a higher level of noise was present, confirmation was obtained for the fundamental frequencies.

The measurements conducted on the chimney allowed for the identification of two major vibration frequencies along orthogonal directions of the chimney.

The values of frequencies were identified with a maximum error of 0,012Hz. A second global vibration frequency was clearly identified at a lower frequency, involving simultaneously vibration in the two directions.